Antinous (also Antinoüs or Antinoös; Ancient Greek: Ἀντίνοος; 27 November, c. 111 – before 30 October 130) was a Bithynian Greek youth and a favourite, or lover, of the Roman emperor Hadrian. He was deified after his death, being worshiped in both the Greek East and Latin West, sometimes as a god (theos) and sometimes merely as a hero (heros).

Little is known of Antinous’ life, although it is known that he was born in Claudiopolis (present day Bolu, Turkey), in the Roman province of Bithynia. He likely was introduced to Hadrian in 123, before being taken to Italy for a higher education. He had become the favourite of Hadrian by 128, when he was taken on a tour of the Empire as part of Hadrian’s personal retinue. Antinous accompanied Hadrian during his attendance of the annual Eleusinian Mysteries in Athens, and was with him when he killed the Marousian lion in Libya. In October 130, as they were part of a flotilla going along the Nile, Antinous died amid mysterious circumstances. Various suggestions have been put forward for how he died, ranging from an accidental drowning to an intentional human sacrifice.

Following his death, Hadrian deified Antinous and founded an organised cult devoted to his worship that spread throughout the Empire. Hadrian founded the city of Antinopolis close to Antinous’s place of death, which became a cultic centre for the worship of Osiris-Antinous. Hadrian also founded games in commemoration of Antinous to take place in both Antinopolis and Athens, with Antinous becoming a symbol of Hadrian’s dreams of pan-Hellenism.

Antinous became associated with homosexuality in Western culture, appearing in the work of Oscar Wilde and Fernando Pessoa.

It is known that Antinous was born to a Greek family in the city of Claudiopolis, which was located in the Roman province of Bithynia in what is now north-west Turkey. The year of Antinous’s birth is not recorded, although it is estimated that it was probably between 110 and 112 AD. Early sources record that his birthday was in November, and although the exact date is not known, Lambert asserted that it was probably on 27 November. Given the location of his birth and his physical appearance, it is likely that part of his ancestry was not Greek.

There are various potential origins for the name “Antinous”; it is possible that he was named after the character of Antinous, who is one of Penelope‘s suitors in Homer‘s epic poem, the Odyssey. Another possibility is that he was given the male equivalent of Antinoë, a woman who was one of the founding figures of Mantineia, a city which probably had close relations with Bithynia.[8] Although many historians from the Renaissance onward asserted that Antinous had been a slave, only one of around fifty early sources claim this, and it remains unlikely, as it would have proved heavily controversial to deify a former slave in Roman society. There is no surviving reliable evidence attesting to Antinous’s family background, although Lambert believed it most likely that his family would have been peasant farmers or small business owners, thereby being socially undistinguished yet not from the poorest sectors of society. Lambert also considered it likely that Antinous would have had a basic education as a child, having been taught how to read and write.

The Emperor Hadrian spent much time during his regime touring his Empire, and arrived in Claudiopolis in June 123, which was probably when he first encountered Antinous. Given Hadrian’s personality, Lambert thought it unlikely that they had become lovers at this point, instead suggesting it probable that Antinous had been selected to be sent to Italy, where he was probably schooled at the imperial paedagogium at the Caelian Hill. Hadrian meanwhile had continued to tour the Empire, only returning to Italy in September 125, when he settled into his villa at Tibur. It was at some point over the following three years that Antinous became his personal favourite, for by the time he left for Greece three years later, he brought Antinous with him in his personal retinue.

“The way that Hadrian took the boy on his travels, kept close to him at moments of spiritual, moral or physical exaltation, and, after his death, surrounded himself with his images, shows an obsessive craving for his presence, a mystical-religious need for his companionship.”

Lambert described Antinous as “the one person who seems to have connected most profoundly with Hadrian” throughout the latter’s life.[17] Hadrian’s marriage to Sabina was unhappy and there is no reliable evidence that he ever expressed a sexual attraction for women, in contrast to much reliable early evidence that he was sexually attracted to boys and young men. For centuries, pederasty had long been socially acceptable among Greece’s leisured and citizen classes, with an older erastes (aged between 20 and 40) undertaking a caring sexual relationship with an eromenos (aged between 12 and 18) and taking a key role in their education; and Hadrian took Antinous as a favored servant when they were aged about 48 and 13. Although pederasty may not always have been accepted in Roman culture, a bisexual interest in women and boys was ‘normal’ for men in the upper echelons of Roman society by the early 2nd century.

It is known that Hadrian believed Antinous to be intelligent and wise, which might explain part of the attraction. Another factor was potentially a shared love of hunting, which was seen as a particularly manly pursuit in Roman culture. Although none survive, it is known that Hadrian wrote both an autobiography and erotic poetry about his boy favourites; it is therefore likely that he wrote about Antinous. Early sources are explicit that the relationship between Hadrian and Antinous was sexual. During their relationship, there is no evidence that Antinous ever used his influence over Hadrian for personal or political gain.

In March 127, Hadrian – probably accompanied by Antinous – traveled through the Sabine area of Italy, Picenum, and Campania. From 127 to 129 the Emperor was then afflicted with an illness that doctors were unable to explain. In April 128 he laid the foundation stone for a temple of Venus and Rome in the city of Rome, during a ritual where he may well have been accompanied by Antinous. From there, Hadrian went on a tour of North Africa, during which he was accompanied by Antinous. In late 128 Hadrian and Antinous landed in Corinth, proceeding to Athens, where they remained until May 129, accompanied by Sabina, the Caeserii brothers, and Pedanius Fuscus the Younger.[27] It was in Athens in September 128 that they attended the annual celebrations of the Great Mysteries of Eleusis, where Hadrian was initiated into the position of epoptes in the Telesterion. It is generally agreed, although not proven, that Antinous was also intitiated at that time. 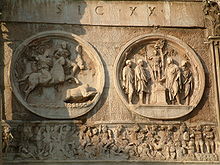 From there they headed to Asia Minor, settling in Antioch in June 129, where they were based for a year, visiting Syria, Arabia, and Judea. From there, Hadrian became increasingly critical of Jewish culture, which he feared opposed Romanisation, and so introduced policies banning circumcision and replacing the Jewish Temple with a Temple of Zeus-Jupiter. From there, they headed to Egypt.[29] Arriving in Alexandria in August 130, there they visited the sarcophagus of Alexander the Great. Although welcomed with public praise and ceremony, some of Hadrian’s appointments and actions angered the city’s Hellenic social elite, who began to gossip about his sexual activities, including those with Antinous.

Soon after, and probably in September 130, Hadrian and Antinous traveled west to Libya, where they had heard of a Marousian lion causing problems for local people. They hunted down the lion, and although the exact events are unclear, it is apparent that Hadrian saved Antinous’ life during their confrontation with it, before the beast itself was killed. Hadrian widely publicised the event, casting bronze medallions of it, getting historians to write about it, commissioning Pancrates to author a poem about it, and having a tondo depicting it created which was later placed on the Arch of Constantine. On this tondo it was clear that Antinous was no longer a youth, having become more muscular and hairy, perceptibly more able to resist his master; and thus it is likely that his relationship with Hadrian was changing as a result.